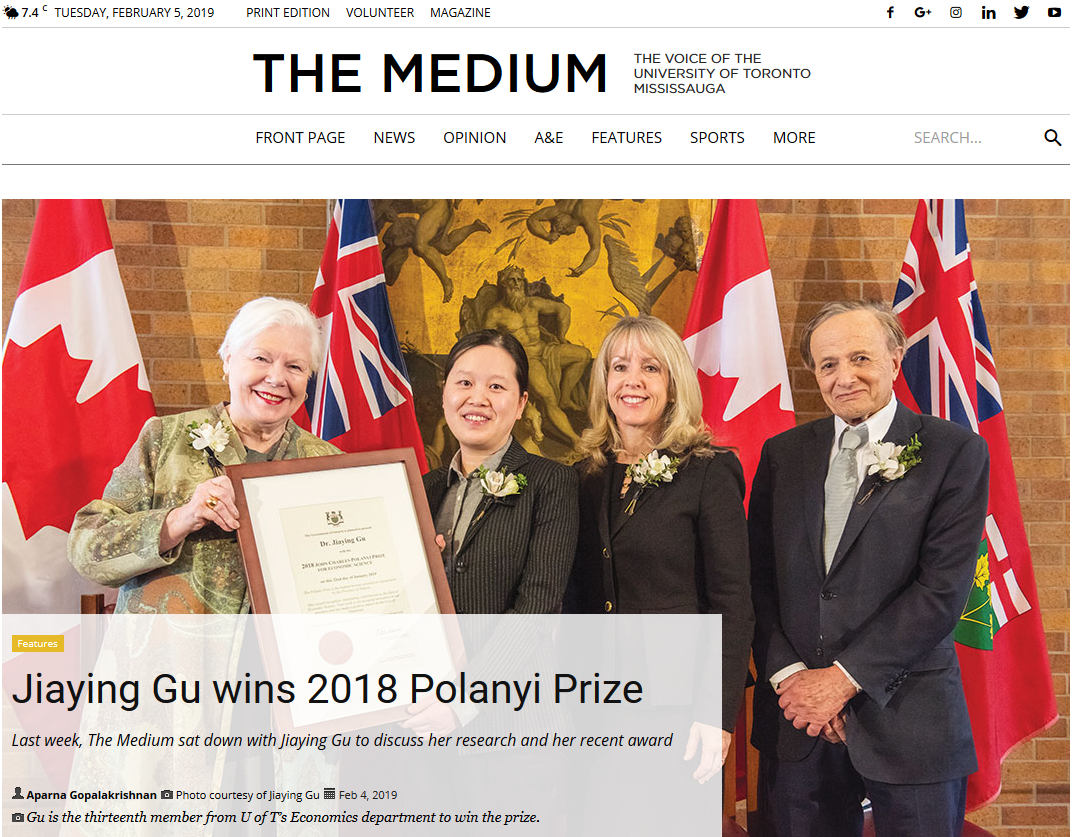 Jiaying Gu, an assistant professor in UTM’s department of Economics, was awarded the 2018 Polanyi Prize in Economic Science for her statistical approach of measuring unobserved or unmeasured heterogeneous quantities like individual tastes and preferences, with real-world application in teacher evaluation. Gu was one of five researchers awarded with this achievement. Last week, The Medium sat down with Gu to discuss her research, her award, and her advice for students.

Gu says that the phone call she received in April 2018 informing her of her win “came as a big surprise to her.” She sees this award as a “very big yes to the type of research [she’s] doing and [serves as motivation] to continue doing high quality research.” She described competitive awards like the Polanyi Prize as “push factors [for researchers] to keep going [and] be true scholars.”

The Polanyi Prize was created in honor of John Charles Polanyi, who won the 1986 Nobel Prize in Chemistry. The prize awards researchers in the early stages of their career with funds. Provided by the Government of the Province of Ontario, this prize is valued at $20,000. Researchers from fields of physics, chemistry, physiology, literature, and economic science are eligible to receive this award. Among this year’s five recipients, three were from the University of Toronto: astrophysicist Jason Hunt, Husam Abdel-Qadir assistant professor in the Department of Medicine, and UTM’s Gu.

On January 22, Gu received her award at Massey Hall and became “the thirteenth member of U of T’s economics department to win the prize,” according to UTM News.

Gu’s journey to academia can only be described as a serendipitous result of the circumstances she found herself in after completing her Master’s degree in Economics from the National University of Singapore in 2008. As a recent graduate trying to find a banking job in the aftermath of the 2008 financial crisis, Gu found herself unsatisfied by the positions available. Her advisor directed her towards research, which inspired her to complete a Ph.D. in Economics from the University of Illinois Urbana-Champaign.

Gu speaks fondly about her place in academia, “I [have] selected myself into academia to follow my interests, and my curiosity by following my gut feeling and intuition” to understand a greater profound truth about the world.

Her current area of research is econometrics, and in specific, the use of statistical methods to describe economic behaviour like individual tastes and preferences and the impact of such decisions on the broader economic landscape.

When asked to explain her work, Gu says, “The methodology is developed out of my [Ph.D.] thesis work. I tried to develop a method which is more flexible [than the present method] to collect, analyze, and summarize data to understand a certain truth about the world. My methodology tries to tease out information about the unobserved data, which is not directly measured, from the confounded and noisy observed data.”

Gu’s work focuses on heterogeneity in individual tastes and preferences, which affect an individual’s purchase decisions. In particular, her methodology is being used for teacher evaluation, to measure and analyze short term effects, like academic performance, and long-term contributions of teacher quality on a student’s life, like wages earned by the student and even the education level of the student’s children. The present method being used for teacher evaluations was developed in the 1960s, and built into it were assumptions about the data used, which are obsolete in the present era of Big Data.

She views such “big-picture methodology” as a “bridge to answer [numerous] other questions in education economics.” Gu draws many analogies to explain the power of econometric methods like hers in not just education economics, but in industrial organization and marketing. She quips, “[As econometricians] we are inventing hammers, then we go out to look for nails” to describe the “moving target” of her work.

When asked if she had any advice for students wishing to pursue research or a career in academia, Gu shares her personal experience of feelings of academic inadequacy even in the second year of her Ph.D. She wants to reassure students that such feelings are completely normal. She advises students to deeply reflect and ask themselves where they see themselves, and to pursue this academic vision for themselves, regardless of their self-perceived ability constraints. “Don’t be afraid of trying, because [even] if it doesn’t work out, there are always alternatives,” she says to students.

Specifically addressing undergraduate students, she motivates them to be less short-sighted and not focus merely on maximizing their GPA. She suggests that they should think of the bigger picture, by asking themselves “what type of person they want to grow into” and find a job that creates real impact in the society.

She also calls for improvement in student-faculty communication to motivate undergraduate students towards such an approach towards university education.

Her central advice to students is, “Be a sponge and absorb as much as [you] can” in your early years of university education.