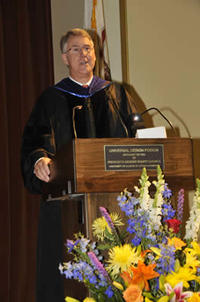 In 1979, Professor Winkel earned his undergraduate degree at the University of Illinois at Urbana-Champaign (B.A., Economics), where he was a member of Omicron Delta Epsilon, Omicron Delta Kappa, and an Edmund J. James Scholar.

Former senator Richard J. Winkel is the director of IGPA's Office of Public Leadership, which coordinates education and training opportunities for state and local government officials in Illinois. The Office of Public Leadership provides leadership and management training, mentoring and other learning opportunities for elected and appointed government officials, primarily at the municipal, township and county levels. The office also consults with units of government interested in improving their leadership education and in other matters of policy and procedure. It is one of four centers of the Institute of Government and Public Affairs.

Professor Winkel has served as a visiting senior fellow of the Institute of Government and Public Affairs (IGPA) and an adjunct professor in the College of Law at the University of Illinois, where he teaches a course on legislation and legislative process. He also hosted the popular weekly radio program, "Government Insight," a joint partnership with the College of Law, IGPA, and WDWS-AM 1400 and served as an analyst on the extensive WDWS-AM 1400 Election Night coverage team.

Professor Winkel was an Illinois state senator from 2003 to 2007, and an Illinois state representative from 1995 to 2003. From 1992 to 1994, he was a member of the Champaign County Board, where he served as chairman of the policy, procedures, and appointments committee. Professor Winkel practiced law in the Champaign-Urbana area for 23 years in civil litigation and, while serving in the Illinois General Assembly, a general civil practice. He was of counsel at Meyer Capel Law Firm while in the legislature, and before that a partner at Harrington, Porter & Winkel, in Champaign. He earned his law degree at DePaul University, College of Law in 1982.

Winkel is a co-author of a book entitled Illinois Politics, published by University of Illinois Press in January 2010. He was a contributing author for the following reports published by the Institute of Government and Public Affairs: Opportunities for Reforms and Culture Change in Illinois Politics (The Illinois Report 2010, IGPA); Challenges and Opportunities: On the Road to Reform in Illinois (IGPA, March 27, 2009); Multiplicity of Governments; Paucity of Money: A Look at Options for Local Government Consolidation and Streamlining in Illinois (IGPA, October 27, 2008); and Is There a Con-Con in Illinois' Future? (The Illinois Report 2008, IGPA). He was a contributing editor for two publications: "Covenants Not to Compete: A State-By-State Survey," American Bar Association, 1991; "Employee Duty of Loyalty: A State-By-State Survey," American Bar Association, 1995.

In 2015 Winkel was named as Deputy Executive Director for Policy at the Prairie Research Institute. He will conduct this role in tandem to his continued work as the Director of the Office of Public Leadership in the Institute of Government and Public Affairs.

Professor Winkel is married to Debra, and they have adult children, Meghan and David.