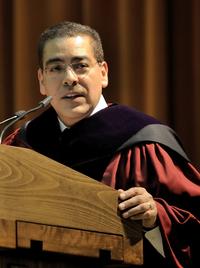 Jesse H. Ruiz is a partner in Drinker Biddle & Reath's Corporate and Securities Group, serves as the firm's Marketing Partner, and is a member of the firm’s Client Service Committee. Drawing on his experiences in business and management consulting, and his work in the public sector, Jesse also counsels public and privately­held companies and entrepreneurs on strategic initiatives and transactions.

In 2011, the Walmart Legal Department awarded Jesse its inaugural Walmart Legal Spark Award for “outstanding client and community service and dedication to diversity in the legal profession.

Since 2006, Jesse has served as a member of the board of directors of Commonwealth Edison, an Exelon Company.

In May 2011, Chicago Mayor Rahm Emanuel appointed Jesse the Vice President of the Chicago Board of Education. The Board oversees the operations of the Chicago Public Schools, the third largest school district in the nation.

U.S. Secretary of Education Arne Duncan appointed Jesse to the U.S. Department of Education Equity and Excellence Commission in February 2011.

In August 2013, Jesse was appointed by the president of the ABA to the Commission on Hispanic Legal Rights and Responsibilities.

He is past president of the Hispanic Lawyers Association of Illinois and Past Chairman of the Hispanic Lawyers Scholarship Fund of Illinois. He is also Past Chairman of the Chicago Committee on Minorities in Large Law Firms. He has taught corporate law as an Adjunct Professor of Corporate Law at John Marshall Law School. He also serves on several other civic and charitable boards and committees.